At home for Christmas 2015 I came upon The 'New Light'  painting competition show held biennially at the Bowes Museum in County Durham .  Born in North East England I met one of the criteria to enter and decided to try for the exhibition in July 2017.  I submitted two pictures recently made 'The Aluminum Ladder' and 'The Tale Of Christopher Wanker'.

In September 2017 I was disappointed to receive a letter regretting to inform me that my pictures had not been chosen for the exhibition. Strike 3.  Fucked off with failure at judged painting competitions I knew I must find for myTHself a place to show Christopher Wanker.

I had enjoyed making the pictures and valued the results but failure to win an exhibition space meant in accordance, with the agreement I had made with my wife, I must return to building full time.  By the end of October 2018 the house I had begun building in 2013 was finished and let out.  I became a land lord with time to make pictures.

2015 was the bicentennial year for the Battle Of Waterloo.

Inspired by the Royal Academy Summer Show Open Call for that year I made pictures for the entry application.

In 2013/14 I was commissioned by my friend to paint a picture for his new restaurant in Cherbourg.  Respecting the taste of the patron I planned and painted a large sensible figurative acrylic composition.

I enjoyed painting at this scale and gained confidence in the pictures success at the restaurant.  I had thought painting a de-funked medium but skillfully applied paint to make a picture can be magical.

Between 2013 and 2018 I spent most of my time building a house but mid-Winter is unsuitable for building outside.  I dedicated a month to make a new picture for the show.   Judging it was time to expose more I decided to unite two disparate parts of myTHself - Christopher Wanker Fantasy banker would back the toy soldiers at The Battle Of Walkerloo.

Alas the pictures were not short listed for display in the RA summer show of 2015.  Strike 2. 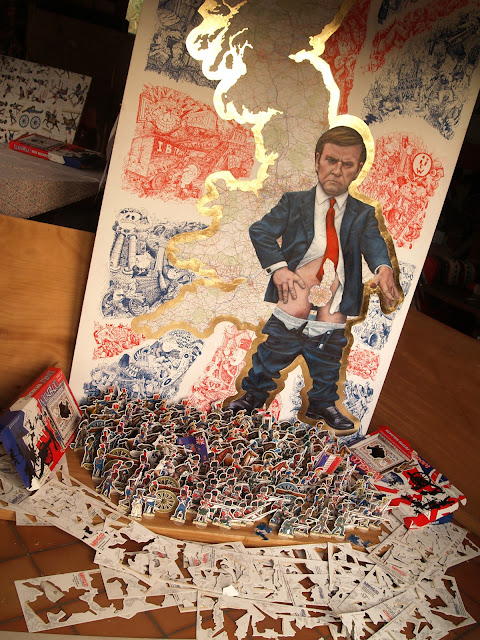 I had never been completely satisfied with any Christopher Wanker photo montage picture.  Whilst living in France I took an afternoon painting class at Cherbourg art school and was shown the basics of 'pretend it's oil' acrylic painting.  I developed a kind of brush scrubbing paint technique on to a dark painted base board which had solidity.  I was seduced by the leather like surface of the painted pictures.  This Christopher Wanker had been painted onto the road map surface, which had been glued to a board.  His painted body united into the map surface as picture on to paper.  The unity of the UK road map and myTHself Christopher Wanker was much more convincing than the photo montages.  Painting the map and him together made Christopher Wanker more real, as a picture.

In 1996 Christopher Wanker pictures were sent along with an application to participate in an exhibition in east London called 'NEW WORK '98 UK'.  The pictures consisted of prints of photos taken of the card and paper model shown.

The model depicted me dressing for city business/work.  When fully dressed I become one with the UK mobile phone company mini-maps I had been in front of. In the same picture plane as the map (perpendicular to the photo background of my bedroom on the floor plane behind) I am able to feel at one with my country's map and I am able to pull out my magical map cock, London's cock and become Christopher Wanker. In the next few figurines Christopher Wanker is in the trans-like frenzy of his magical masturbation and the map cock is detached from the UK road map-whole.  He slips back to the floor plane of  his bedroom - but during those ogasmic moments the UK road map is missing it's capital city.

This model was strongly influenced by the stations of the cross and main crucifix present on the walls of most/all Catholic Church's.  I had been a practising Catholic all my life until leaving home at 18.

MYthSELF assumed Christopher Wanker perfect for a role in the NEW WORK exhibition.  Alas the application for a place in the exhibition was unsuccessful.  Strike 1. 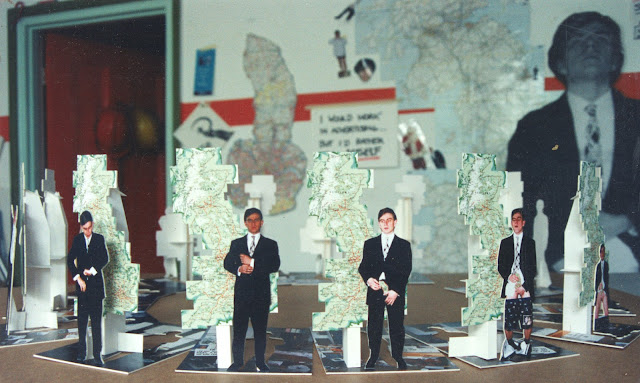 In the summer of 1998 after Englands defeat to Argentina in the world cup quarter final I broke my arm.  I stopped making Christopher Wanker pictures because of my cast, wrote a book about witches for my niece and began to get re-interested in military costume and history.  In the Fall of 1998 I met Laura with whom I moved to France and married.