Photographs taken by friends and myTHself at London's Cock 'Coming Out Of My Bedroom' Exhibition, 1996. 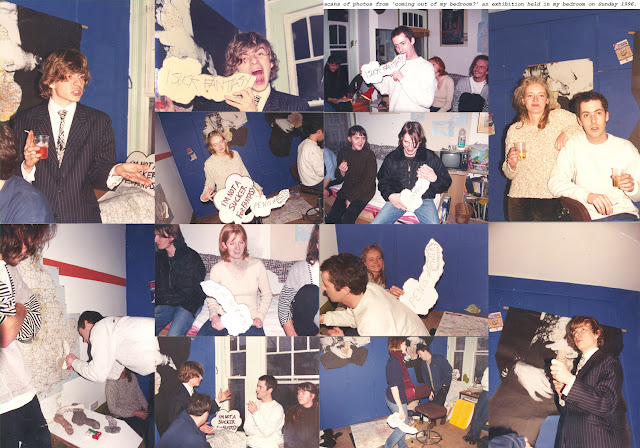 On a Sunday afternoon in the winter of 1996 I held the private show 'Coming out of my bedroom' in my bedroom, in Fulham, London.  I presented models and collages depicting 'London's Cock' to invited friends.  The presentation and subsequent discussion of  the map phallus overtly fixed the identity of myTHself Christopher Wanker and the logical conclusion that his cock was London's cock.﻿

In 1972 He/I was born in   () the youngest child of three.  My brother, with whom I shared our bedroom, is five years older, my sister seven years older.  It was once said, with laughs, at a family Christmas lunch that I was an accident.  My mother was a housewife skilled in dress making.  My father was a production supervisor in a new tyre factory.  My father had been a miner like his father and was of a large, prominent Catholic family in his home town .  I was brought up Catholic, my mother converted to Catholicism when I was a child.

I grew up in a cul-de-sac built in the late 1960's and had lots of good friends.  I was passionate about things military and spent a lot of time playing war themed games with friends and toys. I was good at school and got good school reports.  I was interested and enthusiastic especially in Maths and Art.  I never read much or listened to music neither were popular in our house, I hated football which was. I have always been a terrible speller and slow reader.  I served on the alter in church until I was 15, then I got a part time job on Sunday mornings as a pump attendant at a local garage.

When I was little I think I wanted to be a soldier.  I think it was ideas of bravery and triumph which attracted me... and the great suits.  I thought briefly to myself about being a priest but I never heard god calling like they said he would.  When i was thirteen I wanted and received a drawing board for Christmas.  With Carreers Service advice I began to think of being an architect.  I got the best GCSE results in my school year and went on to sixth form to get four A levels .  At 18 I left home and went to Oxford polytechnic to study architecture.

When I finished my degree in 1993 there was little work for architects in the UK.  I moved back home to the north briefly but through friends moved into a room in a shared house in Fulham west London. I was unemployed and began to re-consider my relation to the world. I lived in this house until 2001 when I moved to to share the home of my partner - now wife.  I live there now with no children but many animals.

He/I is the creator of the EasterLegs.  He/I is Christopher Wonker.

"It was the Wednesday before Easter in 1998, my niece was almost three. I felt obligated to send her a gift for the first Easter she would be aware of. I lived in London, she lived in the north east, I had about 3 pounds.  I went to the shops and saw all the Easter eggs, I had enough money to post a choclate egg but not buy it as well.  I went home and set about making a gift. I was going to send her a simple chocolate bar but there is more to Easter than that... holiday gifts should be more than stuff given. The previous Christmas I'd shared a joke with my niece. I pointed to my knees and asked 'if you are my niece, who's knee's are these?' ... she laughed aloud. It was the first joke we shared. I thought about the cardboard Christmas stockings I got as a child. It had regular chocolate bars stuck to a piece of card board in the shape of a stocking, this had made them special for Christmas. I thought about Easter eggs.... Easter eggs.... and then Easter Legs!!
I drew a large comedy cartoon leg and gave it googly eyes, a nobly knee, and prickly hairs, wrote on it ''to my knees", attached a few regular chocolate bars and posted it to her. I heard my niece had been delighted to receive her Easter Leg.
Over the next few weeks I began to ponder my idea. Broke, I wondered how I could make money with it. I drew all kinds of cartoon legs: animals; sportsmen; heroes; monsters. Then I drew a cartoon leg... with cartoon wood behind it... and I banged a large cartoon nail write through them both, the cartoon nail wound of the cartoon leg ran red cartoon blood. I had crucified an EasterLeg.  What was it's relation with Jesus' leg?

Brought up through the catholic church this Easter Leg picture/idea held power over me. I loved it. But to sell the idea must I forget it?  This tension of values interested me and was the turning point in providing the ideological momentum for the animated flash website www.EasterLegs.com. "

I come from within myTHself, from a driving ambition to be part of you.  I am my ambition seen frustrated and fulfilled in my grotesque and surreal unity with the map of my country.  I am an image aroused by desire to be before you and get into you. Put my cock London's cock into you, seeding myTHself...  Look at the map of my country and see part of myTHself... I mean business - mean I business,

I am Christopher Wanker and I am here so you will see and consider myTHself.

For years I have remained within myTHself, behind Christopher Walker.  Within myTHself I always had the knowledge that I was, that I could come out.  It sustained myTHself through the banal labours of Christopher Worker painting the walls in people's lives brilliant white with obliterating  emulsion.  I feed the egoism in myTHself that puts myTHself before you and in you.  You have perhaps all, already looked at my cock, London's cock, but only now thanks to me  can you see it!  My cock is London's cock, it's my fantastic tool for cultural propagation, dissemination - it's in you!"


How did I come to see it and how did it become a part of me?


In the week after Easter In 1994 on the M1 motorway south of Nottingham I sat in the back seat of a car whilst the two blokes giving me a ride talked in the front.  I was hitch hiking south having visited my family in the North for Easter. I saw the rear of the truck in front and it said ''Hula-Hoops'' a brand of potato snack I knew and ate.  As we overtook I saw 'Hula -Hoops' was also on the side of the truck. The next truck we passed said nothing, it was blank on the back and on the sides... I began to see blank sided haulage vehicles all around. Trucks with hauliers own details on the sides seemed almost meaningless to most of the public who saw them.  With a quick count I estimated two thirds of the working haulage trucks' existing surface space could communicate with more relevance to see-ers on the crowded British road network.
Over the next few months I spent my time turning this observation into a business plan. I called it "SMAC'm" - Strategic Mobile Advertising Campaign media.  I knew nothing of business and little of advertising but began the project with belief in the idea and self confidence.  I was living in west surrounded by the affluent business class.
I immersed myself in the creation of the business plan.  To help me visualise the roads and hauliers locations I pasted my bedroom/office with a large scale road atlas of .  It covered the walls and the ceiling wrapping the insides of my room I worked, slept and dreamt in.

I saw how business needed demand for it's product - with care for little else - and how advertising encouraged and created this demand - with care for little else. I became disillusioned with them both.  My belief in the feasibility of smac'm remained but my belief in its reason to be was undermined. Without money or experience raising the capital for my idea would be difficult. But without my belief it was impossible. In an attempt to persuade my self I thought up 'De-Ad' and fantasized that with profits from SMAC'm I could create a de-Advertising communicative work which would present the other side of the product of business.   ... together they made SMAC'm DeAd, and it was.
The corps of my schizophrenic business fantasy SMAC'm DeAd enveloped me.  Filled with frustration in my thwarted ambition I stared at the map of my country pasted on to the walls of my office... of my bedroom.  The map represented roads constructed over hundreds of years by the desires of the country's people to move them and theirs about.   On the roads were the trucks, and on the trucks would be the messages my vision had enabled.  My fortune would come from the advertising I had foreseen and that advertisements potential to tap into the desires of my country.  And I saw it rising in the form of the main roads north out of completed orbital motorway which bounds that metropolisthat is the country's capital.  At once it was part of me. My cock was 's cock.  I became united with the map, the form of it, of my country and me.

Over the coming months I excitedly explored my fantastic new anatomy . I became myTHself Christopher Wanker , banker of fantasy, whose main interest would be the interest of others and who in his suit could feel apart of his country.