'The Rubbish' is a superhero/monster of our time. 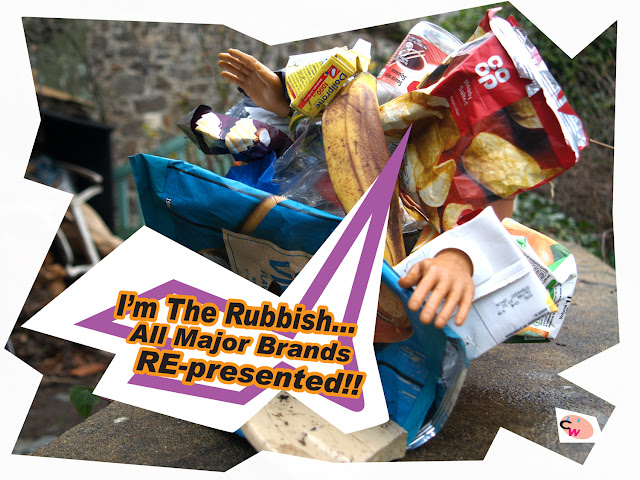 'The Rubbish's' origins are at once obscure and all pervasive.  It is thought to be an emergent intelligence made possible by the exponential growth and sheer quantity of  man made rubbish real and virtual strewn across our planet.  A life force seems to have emerged in the new global networked connectivity of advertising and commercially oriented message media.  The Rubbish thrives on consumer waste, junk e-mail and old adverts.  The Rubbish speaks in a language solely derived from commercial tag lines and catch phrases but with occasional longer speeches strung together from obscure advertorial.  However the Rubbish has coined one catch phrase for itself  "RUBBISH! All major Brands REpresented"...

As garbage finds its way everywhere so does The Rubbish.  It's a consciousness that seems to be able to travel and become manifest in garbage through physical proximity.  It can travel with immediacy through littered environments and that includes the internet via junk e-mail.  It is an excellent spy. Although having no actual physical strength it can hide in plain sight and in the smallest pieces of litter.  It's known offensive capabilities are suffocation and/or entombment of opponents in litter filled environments and it is thought to be capable of conjuring defensive deadly poisons depending on the proximity of appropriate litter in the local environment.  **THERE IS WORRIED SPECULATION ABOUT ITS ABILITY TO OFFER AN END OF WORLD SCENARIO IF CORNERED RELATIVE TO NUCLEAR WASTE CACHES. (oh no, in the pic below 'The Rubbish' is pictured less than a mile from a nuclear power station....FOR REAL! ... and there is a Nuclear Reprocessor only 10 miles away... with lots of nasty nuclear rubbish...)

The Rubbish's morality is ambiguous.  Like almost all life it wishes to continue, however human civilisation currently provides the entity with a bountiful rubbish filled environment.  As long as this condition persists we can count on 'The Rubbish' to be a staunch defender of humanity and all the crap we make.

The Rubbish can be very funny, delivering advert taglines with perfect comic timing in the most incongruous scenarios.  However in regular conversation its dependence on the commercial strap lines and advertorial texts can make it ambiguous, oblique and nonsensical.  It seems to talk... a load of rubbish...

All of The Rubbishes physical, aural and virtual manifestation is constrained to human rubbish and so it's very existence is a constant contravention of commercial and copyright law protecting that 'rubbish'.  Issues will surely arise if The Rubbish ever becomes involved in self promotional merchandise!

There is one certain sworn enemy of 'The Rubbish'... a heroine who is known to have had considerable success in her fight... She is Trash Girl!

The Rubbish responded "because I'm worth it - every little helps"...

Who's side are you on?