In October 2018 I made a small exhibition of myTHself in Normandy and announced I was to invest more of myTHself into the real pretend war my paper soldiers had been involved in for 10 years.  A video blah blah was made introducing myTHself's new strategic direction. 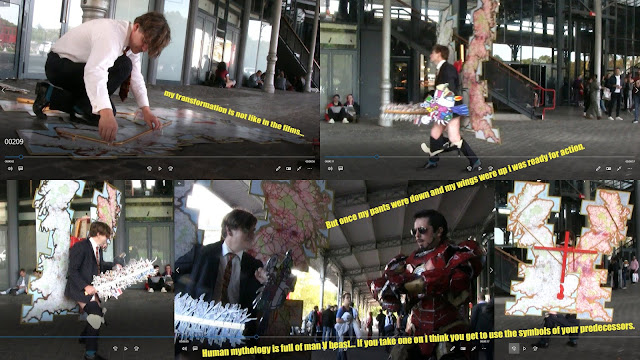 ***Bankers make money - I myTHself make pictures.  Many banks choose to buy famous pictures with their money.  Christopher Wanker is the Fantasy Banker - His cock is London's cock!  It's a fantastic promotional tool specially developed for mass cultural insertion or  'fame/infamy'.  You could make money with Christopher Wanker's pictures if you buy NOW while they're cheap and sell when they're not! YOUR INTEREST IS MY INTEREST!***


With the help of my wife I walked and talked amongst the humanity of comic con Paris.  'In my suit I feel a part of my country' I announced 'I am Christopher Wanker the Fantasy Banker and My Cock is London's cock!'... 'I declare real pretend war on all those that are part of Disney'...   As Trinity myTHself Christopher WonkerWankerWalkerloo I wear a smart serious pinstripe suit and tie although with the pants pulled down around my ankles.  Attached to my back are map of Britain wings stretching 3 metres high and 2 metres wide.   I wield a Walkerloo sword made from my Walkerloo paper soldiers and defend or deflect glances and blows with my EasterLegs shield.  I did much real pretend Battle action with cosplayers dressed in disney IP (intellectual property) controlled costumes.  And I gave out many unnumbered Fantasy Bank business cards.

***Have you ever watched one of those TV antique shows?  Discovered pictures always out value other old stuff - even jewelry!  If only your ancestor had known an artist and bought their work when the price was low enough for anyone to buy their pictures,,, OH! and great art is often cheap because the best artists always spend time being poor - it helps clarify their vision.  YOUR INTEREST IS MY INTEREST.  BUY a Fantasy Bank Commodity... while you can!***

Even in a festival of carnivalesque costumes myTHself Trinity stood out from the crowd.  Although immediately shocking due to my inferred below waste nudity I was in fact donning a full costume and was prepared and did discuss issues other comic con visitors had concerning my 'originale' appearance.  No one was upset or hurt although I did have a minor incident with a Captain America pro cosplayer.  Funny getting moral concern from a man in a skin tight leather fetish suit messing about with a bunch of others in skin tight leather fetish suits - Wonder Woman looked special... QUICK... where's me bloomin shield!?! 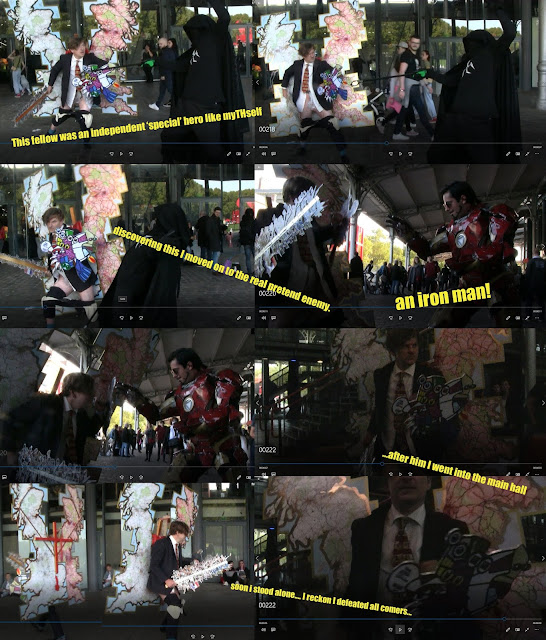 On Sunday for cultural contrast we visited the Musee Quai Branly Jacques Chirac.  This super museum displays numerous and fascinating collections of cultural objects from all over the world.  It was dis-alienating and encouraging to see the quantity and variety of artist and artisan made objects on display from cultures around the world that considered a phallus a necessary and overt part of meaningful expression.

I'm going to make a Symbolic Christopher Wanker TopHat that I can wear in my CW downboy time walking about crowded exhibition halls...  my pants up, my wings down but my hat on.  I see why Picasso dug this museum.  It's filled with inspirational objects.   Thanks to Anais, Fabrice, Noami & Adelle for putting us up so well xx.